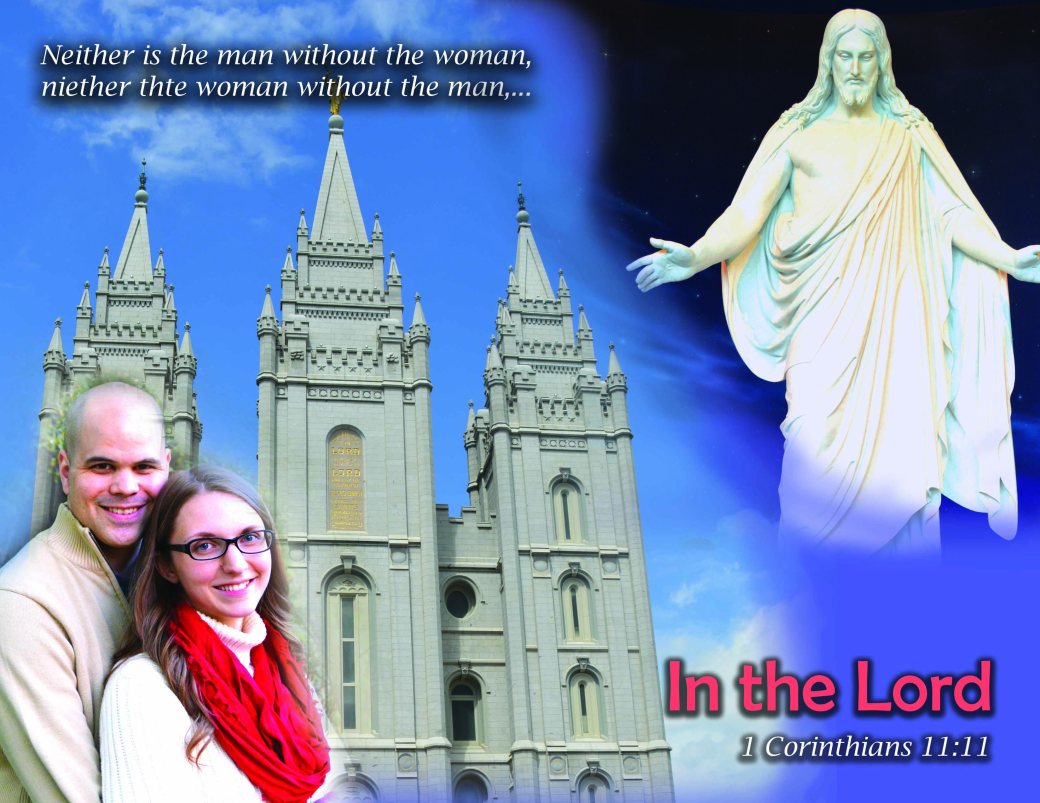 Description
Design a spiritual poster montage using the blend of images and type.

Process
As I considered my options, and the message that I wanted to share, I was going back and forth between the innocence of children, and the sanctity of marriage. I finally decided that I’ve already done a lot of photos with my children, so I’d go with the marriage option.

The first part was to choose a photo, I found this one from our October family pictures, and then found another one of the Salt Lake City Temple, and the Christus, so putting the three together, I came up with my message: “Neither is the man without the woman, neither the woman without the man, in the Lord” (1 Corinthians 11:11)

The Temple would be the background with the couple in the foreground, while in the upper-right corner would be the Savior. I wanted the text “In the Lord” to appear separate from the rest of the quote, and on the same side as the Savior.

I went to OfficeMax to print out a copy for the video. What video? Oh yeah, this one doesn’t call for a video……. oh. Well now I feel silly.

Critique Process
I received a PM from the instructor because my montage was last in line, and his video recording stopped before mine could be opened, so he offered the suggestion to change the font “In the Lord” and to make the Christus a little smaller. He also suggested blending the edges around the couple better. I also received feedback from Jacob Casal on Facebook that shared a lot of the same advice, as well as opening it up a bit, and blending more because the message felt blunt, and the images were a little crowded, so I added the red, made more gradual shadows, and softened edges to blend them better.

Message
Man and woman belong together as husband and wife, and that is best achieved when focusing on principles centered on Jesus Christ.

I believe that success in marriage is not measured in years, that is only one of the products of a successful marriage. I believe it is more like a fun competition of seeing who can make the other the happiest. We don’t stay together just to stay together, we stay together because we make each other happy, and we are devoted to each other. Of course compared to eternity, 11 years is just a drop in the bucket.

Top Thing Learned
The black and white in the bottom left corner that affects the blending (bringing the subject image forward or sending it behind the other) is only available when the subject photo’s mask is created and selected on the bottom right. Took me a long time to finally figure this out, once I did, the rest went much easier.

Thumbnails of any originals 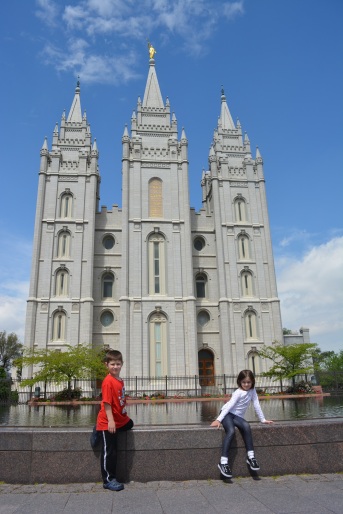 Source of Each Image
Couple by Rachel Little; Temple and Christus by Chandra Wagner.

This is a text widget, which allows you to add text or HTML to your sidebar. You can use them to display text, links, images, HTML, or a combination of these. Edit them in the Widget section of the Customizer.

This is a text widget, which allows you to add text or HTML to your sidebar. You can use them to display text, links, images, HTML, or a combination of these. Edit them in the Widget section of the Customizer.
Loading Comments...
%d bloggers like this: